Topics include the introduction Gimli the Corgi, something I learned about harp strings, and an original joke by me.

The show caps off with 3 new compositions from Kristian Heim.

Nothing like guitar on the back porch and a dog on the grass. Meet Gimli. 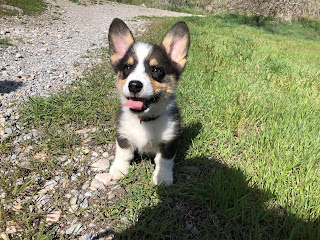 In this episode I lament a happening, reveal a coming change in my life, and talk about a way to overcome a bout with writer's block. The show ends with 3 compositions from Freya Shaw.

In this episode I talk about my next dog, how I hate certain tunings, how Unsolved Mysteries inspired a great horror movie, and of course emails. We then revisit some great guitar pieces by Gisli Johann Gretarsson.

In this episode I talk about that time someone asked John Cage a question regarding flatulence. I also talk about an upcoming concert I've bought tickets to. The show ends with my latest composition.

In this episode I discuss a new technique for overcoming recording difficulties, why staff paper makes me angry, and come to terms with Halloween Kills. The episode ends with a great piece by Fadi Rachid.

I took issue with a lot things, but the most egregious transgression was the return of the Immortal Michael Myers. It seemed as though the previous movie made a point of saying Michael is only human, and is sustained by a relentless determination to do evil. There is no back story, no explanation, just an evil dude. And this is scary. The idea that someone could just be born evil is far more terrifying than someone who is nurtured into evil. But once the slasher becomes immortal, he loses believably, and the scariness is drastically reduced.

In previous sequels Michael took on the common slasher trope of becoming an immortal being who simply cannot be killed. It got especially weird in parts 5 and 6 where they decided Michael was the satanic offspring of some cult ritual. I can't remember exactly, as it was extremely forgettable. While the 2018 Halloween seemed to rectify this and started us down an exciting new path, HK pulled a complete 180 and decided to go home and stay safe. Michael is now an unstoppable tank who cannot be killed by blade, bullet, or flame.

Fortunately, the 2018 film works perfectly as a stand alone sequel to the original. This is fine with me. Not everything needs to be a trilogy.

In this episode I discuss why you shouldn't keep your guitar in the case, my thoughts on the Jerry Garcia casting, and my feelings on the "music" of John Cage.  The episode ends with 12 Studies by Martin Slater.

Episode 40   Topics include the introduction Gimli the Corgi, something I learned about harp strings, and an original joke by me. The show ...